FRONT ENTRANCE PLANS
The refurbishment of the community entry has begun. The big pines and other mature trees that were causing damage to the entry gates and water features at the entry have been removed.
The next step is to reconstruct the failing retaining wall adjacent to the north entrance gate. Once that project is complete, the Board will choose between three proposed options for the entry way. One of the options is to leave the current structure as it but with installation of new plants. The other options will be more costly and are being evaluated, according the Dale Meredith, the special refurbishment project coordinator.
He said Villa Park Landscape, the landscape contractor for Lakeside, is preparing some planting schemes. He added that Del Mar Pacific, the general refurbishment contractor, has selected a masonry subcontractor for the wall.
DMP also has received a number of bid proposals for the new gates and access control system, and the bid results, which will be shared with the HOA Board soon.
Meredith said DMP also is looking at ways to make access to Lakeside more convenient for pedestrians by installing handrails where there are steps.

Advanced Aquatic Technology, the company that provides stream cleaning, upkeep and repair within the Lakeside Garden Grove community, discovered several areas in need of repair in the stream that runs parallel to building 10560. The company, which is in the process of cleaning streams built-up debris within the complex, uncovered breaks in the liner and cracks in the floor when that stream was drained for cleaning. The Board authorized repairs in that area, which included lowering the bottom of some of the stream to allow for more gravel to be placed helping make the biofilter system more effective. Three trees that were either impacting the streams or expected to impact the streams in the future were removed by Villa Park Landscape on Friday, Nov. 15.

Four incumbents and a past Board member were installed on the Lakeside Garden Grove Board of Directors during the Election Session of the HOA meeting at the United Methodist Church in Garden Grove on Monday night, Nov. 18, 2013.

A total of 74 ballots, two more than the required quorum of 72, were validated for the five positions available on the Board. Six candidates sought the positions, including past Board member Darcee Golden and newcomer Jill Hamblin.

Turner will return as President, Covert as Vice President, Aliss as Treasurer, Evans as secretary and Golden will join as Member at Large. All will serve a term that begins with the Thursday, Dec. 5, 2013 Special Refurbishment Board of Directors meeting at the Optimum Professional Property Management office in Tustin. The terms for all will expire in December 2014.

The election came one month after the initial quorum level of 143 ballots was not met. Only 69 ballots were cast during the first round of voting, which ended on Oct. 21, 2013, necessitating a second voting round with a lowered level of ballots needed at 72. A total of 75 ballots were cast, but one was invalidated because of a difference of names on the ballot and on the envelope containing the ballot.

The ballots were validated by Shannon Thornhill, who is serving as temporary Lakeside Garden Grove property manager until a permanent replacement for David Fisher can be hired, and Inspector of Election Kathleen Carter during the Election Session after the regular Board General Session on Monday night.

Young Cho, who served one term on the board as Member at Large, did not seek re-election. 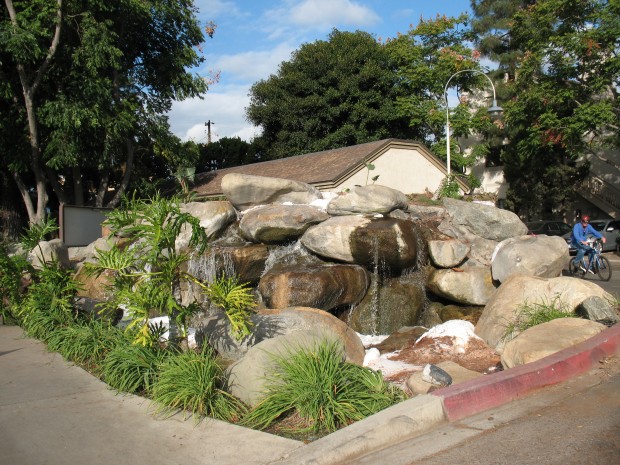 The Lakeside Grove Grove complex got a new look at the front entrance, left, Friday when several trees and plants were removed as part of the Special Refurbishment Project.
Villa Park Landscape removed four large pine trees and two large Bird of Paradise plants on the north side and three large pines on the south side of the complex during the day Friday, Nov. 15, 2013. The company also removed two additional trees that were causing damage to the waterfall and ponds located at the entry. 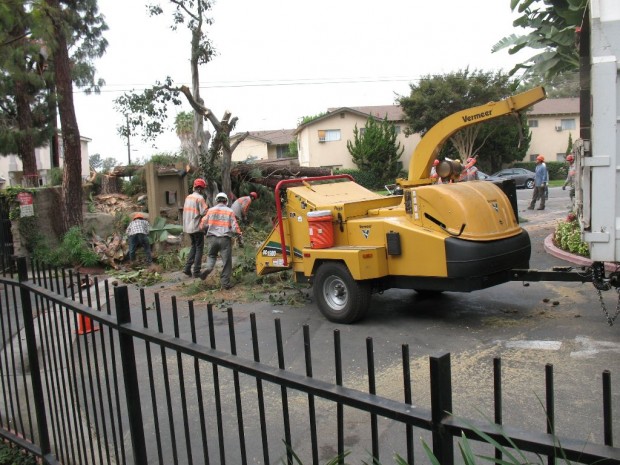 Because of the tree-removal, right, Lakeside Garden Grove homeowners and renters found the front entrance impassable during parts of the day. Villa Park worked on one side of the entrance at a time, but at times, both entrances were blocked as large pines were felled. Vehicles entering or leaving the complex were restricted to either the north of south loop of Lakeside Drive because of where Villa Park’s equipment deployment.
Most of the pine trees were removed from the top down, which is a process of removing manageable sections of a tree in increments from the uppermost part of the tree downward. One large pine was felled from the south side of the entrance toward the north side, missing the central landscape island by a few feet. The process took up most of the day. Traffic returned to normal later in the day once work was completed.
Villa Park, the company that provides gardening services for the Lakeside Garden Grove community, had been contracted to remove these trees and plants as part of the Special Refurbishment Project. The removal of the trees was the first step toward replacing the leaning wall that has made inoperable the north side gate.
Now that the trees are gone, several of the large boulders that make up part of the front entrance landscape will temporarily be relocated until the gate wall and part of the wall facing Nutwood Street, which also had been impinged by the growth of the pines, is replaced. Once the wall is constructed, a new gate will be installed.
According to Casitas Security, the company contracted to provide security and parking services inside Lakeside, the always-open status of the north gate has been the primary cause for an uptick in criminal activity within the complex. The new wall and gate is expected to greatly reduce such activity.

The election for the Lakeside Board of Directors, which failed to reach the state-mandated quorum level of 143 ballots cast in October, finally met the lowered level of 72 ballots cast on Monday, Nov.18, hours before the final regular session of the Lakeside Garden Grove HOA Board meeting at Room 21 of the United Methodist Church at 12741 Main Street, Garden Grove.
Optimum Professional Property Management, Inc. had received 69 ballots, which was three short of quorum, by last Tuesday, Nov. 12. Five additional ballots were received by Monday, bringing the total to 74, two more than needed, according to Shannon Thornhill, who is serving as temporary Lakeside Garden Grove property manager until a permanent replacement for David Fisher can be hired.
Now that quorum has been met, the results of the election will be made known at the Monday night, Nov. 18 meeting, and the new Board for 2014 will be installed during the Election Results Session at 8 p.m., which follow the general session of the HOA Board meeting.

Advanced Aquatic Technology, the company that provides stream cleaning, upkeep and repair within the Lakeside Garden Grove community, discovered several areas in need of repair in the stream that runs parallel to building 10560. 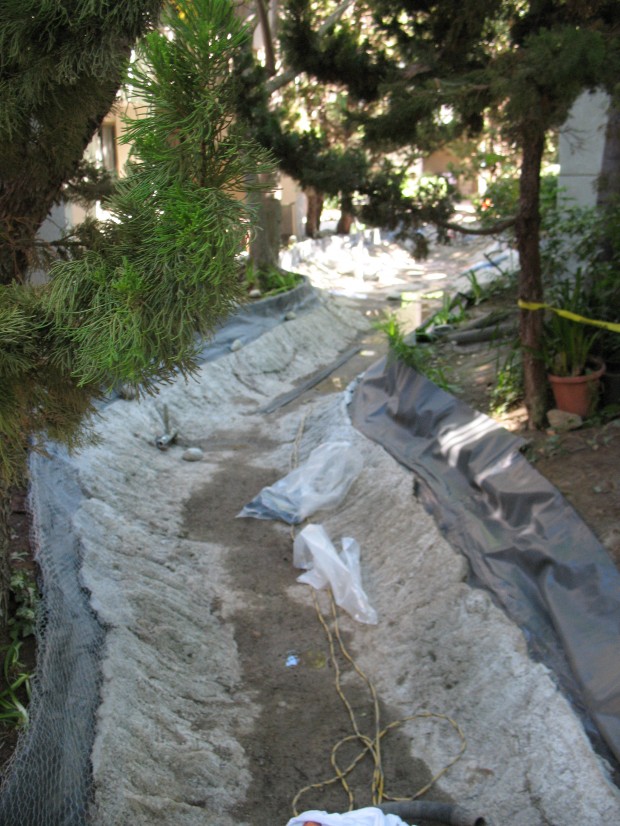 The company, which is in the process of cleaning streams of sludge and built-up debris within the complex, uncovered breaks in the liner, which causes leaks in the system, when that stream was drained. The floor of the stream in some areas also was cracked and needed to be replaced.
In that area, the bottom also will be lowered to allow for more gravel to be placed to make the biofilter system more effective.
There also are a few trees that are right up to the edge of the stream that will be removed. Villa Park, which is contracted to do the tree removal at the front entrance, also is expected to remove those trees on Friday, Nov. 15. 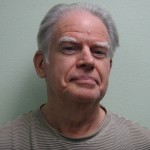 Hello and welcome to the website for the Lakeside Garden Grove Homeowners Association. Your current HOA board has created this site for all homeowners and renters so that everyone has equal access to important Information . . . » Read More

Lakeside is a 286-unit condominium complex, with 25 buildings, eight building types and seven floor plans. It was built in three phases, starting in 1982.

Governed collectively by a Homeowners Association, with a Board of Directors and a management company for this community.